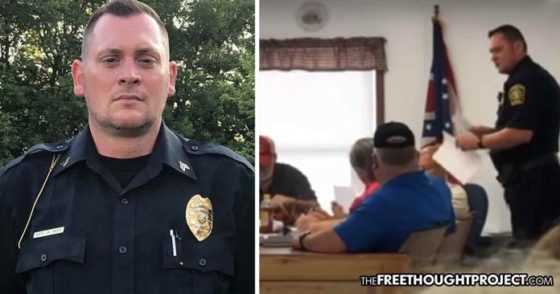 New Holland, OH — New Holland Police Sergeant Brad Mick was doing his job of trying to fight crime in the city of New Holland, and for his dedication to duty, he was fired. This good cop was relieved from duty because the alleged criminals he went after were part of the thin blue line.

Mick dared to call out corruption in his own department by executing a search warrant and filing charges against the mayor, the current police chief, and the former police chief. He was then immediately fired — but not before he tried to seek protection from termination.

According to the Fayette Advocate, Mick filed what is commonly known as a “whistleblower protection affidavit” under Ohio law with Fiscal Officer Mavis Yourchuck a week ago. On Monday night, he filed the same document with the mayor, police chief, and council vice president, Gregg Shaw.

“Pursuant to the Whistleblower Protection Act of Ohio and Revised Code 4113.52, let this serve as my notification that I believe felonies are being committed by New Holland Mayor Clair ‘Butch’ Betzko and New Holland Village Marshal David Conrad,” read the affidavit. “Pursuant to R.C. 4113.52(A)(1)(a), this is my complaint. The village and its administration are hereby put on notice that you are barred from seeking retaliatory measures against me, including but not limited to:

After Mick discovered forgery crimes within the department, he obtained a search warrant and carried it out on Saturday. With the help of the Ohio Highway Patrol and the Pickaway County Sheriff’s office, Mick raided the department.

“For an officer to investigate his own boss when he has probable cause and evidence of a crime being committed is perhaps the most commendable act of all,” said criminal defense attorney Brad Jones of Mick’s bravery to cross the thin blue line. “This officer clearly takes his oath of office seriously and any law enforcement officer who cannot respect that should not have a badge or gun.”

“On July 18, 2018, it was brought to my attention that a paper FAXED to the Ohio Attorney General’s office by the Village of New Holland might be a forged document,” Mick wrote on the request for a warrant. “The form was dated for July 16, 2018 as being signed by Jason Lawless, however, Jason Lawless was believed to be in the state of Alabama on that date and not present in the State of Ohio.”

After Mick compared the form to a dozen other documents, he determined that the signature was forged. During the execution of the search warrant, the mayor showed up and attempted to go inside the department. However, police had set up a perimeter and refused to allow him in.

After finding evidence of the felony forgery during the raid, Mick served a felony summons to Mayor Clair “Butch” Betzko and Police Chief David Conrad during a town hall meeting on Monday.

As Mick handed Conrad his summons, he was immediately given a termination letter — with no cited cause for his firing.

Mick then reportedly walked into the lobby and said, “Just so you know, people, if you do the right think around here, you get terminated.”

The crowd immediately began calling for the termination of the mayor.

Because Mick filed this affidavit before he was fired, according to the Spitz law firm, he has grounds for a lawsuit and could be reinstated before the end of the week.

“If they have followed the proper protocols and successfully navigated the legal channels, whistleblowers in Ohio have legal recourse for retaliatory actions taken against them as a result of their whistleblowing,” says Cincinnati attorney Robert A. Klingler.

However, this has yet to happen. Mick, like many other good cops before him is experiencing the wrath of the thin blue line. Those good cops who have the courage to cross it often end up punished, fired, or worse.

Just this week, TFTP reported on the case of Former DeLand Police Officer Allison Bainbridge who reported a fellow cop for threatening and abusing an innocent citizen. She had the abuse recorded on her body camera yet she was fired and not the offending cop.

Matt Agorist is an honorably discharged veteran of the USMC and former intelligence operator directly tasked by the NSA. This prior experience gives him unique insight into the world of government corruption and the American police state. Agorist has been an independent journalist for over a decade and has been featured on mainstream networks around the world. Agorist is also the Editor at Large at the Free Thought Project. Follow @MattAgorist on Twitter, Steemit, and now on Facebook.

Contributed by Matt Agorist of thefreethoughtproject.com.

The Free Thought Project is dedicated to holding those who claim authority over our lives accountable.