HODEIDA, YEMEN — Just two weeks after bombing a school bus in Northern Yemen and killing scores of children, the U.S.-backed and Saudi-led coalition carried out another atrocity targeting mainly children near the port city of Hodeida early Thursday morning. Of the 31 casualties that resulted from the strike, 24 were children, while the seven adults killed were the children’s mothers, fathers and extended family.

The dead were all part of the same extended family. They had been fleeing fighting between the coalition and Ansarullah resistance movement in the city of Dreihimi, which has been under siege by the coalition for over 10 days. Unfortunately for the family, the coalition forces targeted their vehicles as they fled, killing all of those inside. A photo shows the vehicle that was targeted by airstrikes killing more than 30 civilians, mostly children, in al-Koie district north of Hodeida, August 24, 2018. (MintPress News)

The attack on the fleeing civilians followed strikes launched on Wednesday night, which had targeted the home of 50-year-old Abdullah Dhahbash, an important political figure in the al-Koie district, which includes the city of Dreihimi. The strike killed four of Dhahbash’s family members, including two children, and injured several others. The subsequent strike that killed 31 was launched just hours after, killing the rest of Dhahbash’s family, as well as several members of his extended family, as they sought to escape the fighting.

Almost at one o’clock Wednesday night, four raids targeted the house of Abdullah Dhahbash, killing four people; two of them are children. As a result, the rest of his family along with his brother’s family decided to flee in the morning, but they were targeted while they were barely 100 meters outside al-Koie at 6 a.m. All of them were killed.”

Colonel Omar al-Hashibari, director of security for Dreihimi, speaking to MintPress, stated that the “al-Koie district has been constantly targeted by airstrikes, rocket attacks, and artillery for two days.” He added that, after the grisly fate suffered by Dhahbash’s family, many other families in the area are now unable to escape for fear that they too will be targeted as “[coalition] Apache helicopters target everything that moves.” However, a local source told MintPress that a handful of families had managed to flee successfully.

Dr. Yussif al-Hadhri, the spokesman of Yemen’s Ministry of Public Health and Population, issued the following statement to MintPress about the Thursday morning attack:

Thirty-one people were killed and wounded, mostly children, in two attacks. The second attack targeted ambulances and their crews that attempted to reach the strike location. Ambulances and medical personnel are still unable to reach the area due to being constantly targeted by [coalition] airstrikes.”

No way in for ambulances, no way out for civilians

The road from Dreihimi, which lies about 20 km from the Red Sea port city of Hodeida, has been difficult to traverse since the war began. However, travel has become almost impossible due to a recent and seemingly endless barrage of coalition airstrikes, which has seen UAE Apache attack helicopters launching attacks on government buildings, civilian homes, farms, shops, mosques and health centers in and around the city. There are no humanitarian corridors that would allow civilians to flee or allow ambulance crews to transport wounded. Furthermore, the Saudi-led coalition has also blocked internet access across the region, making it almost impossible for residents to contact the outside world.

“We are trapped in our houses; we cannot move anywhere; the city is being constantly targeted by airstrikes, rocket attacks, and artillery without discrimination,” 50-year-old Ali Qassem al-Dreihemi told MintPress in a previous report, adding:

There are some people who have bled to death in the street, and no one dared to help them because of the airstrikes intentionally targeting pedestrians, paramedics, and fleeing civilians. Some corpses have decayed on the streets.”

Twenty-five-year-old Ataa, a father whose children fled Dreihimi in the early hours of escalation, told MintPress:

I walked alone for 10 kilometers, hiding behind walls and under trees to avoid the Apache [helicopters]. You can hear children crying inside their homes while they are under attack. The situation is very frightening and indescribable.”

In the aftermath of this attack, Yemen’s Health Ministry launched an urgent appeal for Yemeni citizens to donate blood, saying in a statement:  “We are suffering from a health disaster; our capacities prevent us from receiving more wounded and dead.” The situation for Yemen’s healthcare sector is especially dire given that the coalition’s blockade of Yemen has prevented medicine and other critical commodities from reaching around 8.4 million people, many of whom are believed to be on the verge of starvation.

All political parties in independent Yemen, including Houthis, have condemned the latest attack, saying that the blood of children had again been spilled before the blood of those killed in the recent school bus attack had even dried. During that attack, which took place on August 9, coalition warplanes hit a school bus in Dahian city in Yemen’s Sa’ada province using a U.S.-made MK-82 bomb, killing 42 children. The head of Yemen’s Supreme Revolutionary Committee, Mohamed Ali Al-Houthi, said in a statement to MintPress that targeting children and civilians are a consistent policy of the aggressor countries, one that they have systematically followed over the course of the conflict in Yemen.

Current clashes between coalition and resistance forces are concentrated south of Dreihimi, where hundreds of military armored vehicles, foreign mercenaries, and coalition aircraft have participated and laid siege to the heavily-populated area. The coalition has since claimed that it has taken control of the city center, but no comment regarding this claim has yet been given by Yemen’s resistance.

In a separate incident which took place on Wednesday, Islam Suleiman al-Dukhani, an 11–year-old girl, was killed when a U.S.-made thermal torch fell over her head from a coalition warplane while she was playing in her backyard in the Razeh district in Northern Sa’ada. A photo shows the girl who was killed after a thermal torch belonging to U.S.-made Saudi warplane fell over her head. August 24, 2018. ( MintPress News) Close-up of thermal torch, of the kind that caused the death of 11-year-old Islam Suleiman al-Dukhani, August 24, 2018. (MintPress News) 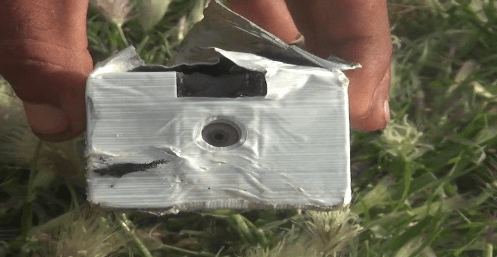 While the coalition has focused on its siege of Dreihimi, a source in the Yemeni Navy told MintPress that its forces carried out a special operation against a Saudi naval base within Saudi territory for the first time. During that offensive, a Saudi military target was hit with an undisclosed weapon in retaliation for the Saudi-led coalition’s recent massacres of Yemeni civilians. So far, the coalition has made no comment regarding this attack nor has the coalition released reports of damage or casualties.

This development comes after Mohammed Ali al-Houthi announced that Yemen’s resistance would resume retaliatory attacks against coalition forces in the Red Sea last Thursday. Earlier in August, al-Houthi told MintPress that the scope of the retaliatory initiative would be limited to two weeks unless the coalition continued to target civilians. Those attacks led Saudi Arabia to temporarily suspend all oil shipments through the Bab al-Mandab Strait.

A military source told MintPress that the Yemeni Navy plans to retaliate and target any and all coalition vessels in the Red Sea in defense of their land from foreign invaders and called on all civilian ships to sail 20 nautical miles away from coalition warships in order to guarantee for their safety. In addition, Yemeni resistance fighters announced that they had fired two Zelzal-1 short-range ballistic missiles at Saudi military positions within the kingdom’s Jizan province in retaliation for the Hodeida attack. However, Saudi Arabia has released no reports about possible casualties or the extent of damage caused.

The coalition attack against Hodeida has put thousands of children at risk of death, starvation, and disease. According to the advocacy group Save the Children, around 6,000 people – half of them children — are fleeing the war-ravaged city every day, bringing the total number of those forced out of the city to more than 330,000 since the offensive first began in June.

Top Photo | A man, injured by an air strike at a fish market, is rushed to hospital in Hodeidah, Yemen August 2, 2018. Abduljabbar Zeyad | Reuters

Ahmed AbdulKareem is a Yemeni journalist. He covers the war in Yemen for MintPress News and local Yemeni media.