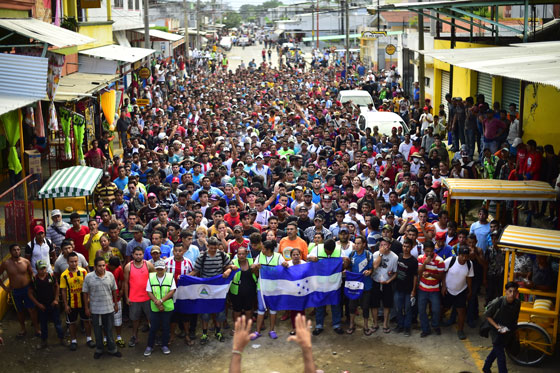 Democrats in key midterm races and battleground states have continued to remain silent about the migrant caravan of roughly 7,000 people from Central America traveling through Mexico toward the U.S.

The Daily Caller News Foundation contacted the campaigns of 20 Democrats who are currently up for re-election in battleground states or in tight races. None responded or gave their views on the caravan.

TheDCNF reached out to the following Democrats about the migrant caravan, asking them how the U.S. should respond to the matter:

Democratic Senate candidate Beto O’Rourke’s campaign was the only one contacted that responded to TheDCNF, however, the campaign said he has not made a position on the caravan yet.

“Beto does not yet have a statement about the migrant caravan. Stay tuned,” an email from the campaign stated. “In general, Beto believes that immigrants help our state and country grow strong, safe, and prosperous and wants to ensure that immigrants have a lawful, earned path to citizenship.”

President Donald Trump and Republicans have strongly pushed back on the caravan, mentioning it at campaign rallies, on social media, and TV appearances. Trump made it clear Monday night that he would not allow the migrants into the U.S. no matter the case, and even said he will deploy troops to defend the borders, if necessary.

“We’re going to do whatever we have to, they’re not coming in,” Trump said to reporters Tuesday.

“We are worried about this caravan coming. But I am more worried what happens on November 6,” McCarthy said. “If we are not on successful on November 6, think what it would mean if Nancy Pelosi was speaker… Think about how many people would be coming.”

According to a majority of polling, Republicans are expected to lose control of the House but keep control in the Senate after the midterm elections. However, there is growing speculation that Republicans could be more successful than polls suggest.

Contributed by Henry Rodgers of The Daily Caller News Foundation.

Content created by The Daily Caller News Foundation is available
without charge to any eligible news publisher that can provide a large audience. For
licensing opportunities of our original content, please contact
licensing@dailycallernewsfoundation.org.